Our main focus is classical a cappella repertoire with emphasis on Nordic körlyrik. However, we enjoy performing classically-oriented music of all ages, and even the occasional popular song. 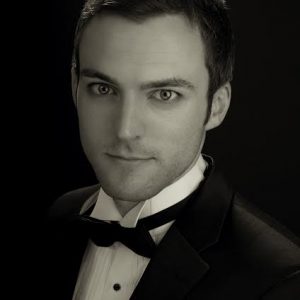 Justin Hazelgrove has been the conductor of Karlshamn Chamber Choir since autumn 2016. Justin holds a doctoral degree in choral conducting, with distinction, from The University of North Carolina at Greensboro with voice and vocal pedagogy as cognate areas of study. He has completed further studies at the Eric Ericson International Choral Centre in Stockholm and at the Malmö Conservatory of Music. In the United States, Justin was active as a university teacher in choral music and conducting. He was Director of Choral Music at Catawba College in Salisbury, NC and was Interim Director of Choirs at Centenary United Methodist Church in Winston Salem, NC.  He was previously assistant conductor of Bel Canto Company, the region’s leading chamber choir. Currently, he works as a as a church musician and choral pedagogue in Karlskrona-Aspö parish, where he leads the Choir of Boys and Men of Fredrik’s Church. Previously, he worked as cantor in Asarum where he led Asarum’s Motett Choir.

Karlshamn Chamber Choir was formed in autumn 1999 by the choir leader, composer and organist Björn Stoltz.

In 2001 a concert tour was carried out to Poland, followed by a number of domestic tours. That same year, Mozart’s Requiem was performed at Lokstallarna in Karlshamn. 2003 was the time for Bach’s Christmas Orchestra and in 2005, the choir performed for the first time in Blekinge Maurice Duruflés Requiem. Mozart’s Requiem was once again performed in the Mozart year 2006. In the autumn of 2008, Gabriel Faurés Requiem was presented. July 2009, the choir toured in northern Italy and sang in five different churches with a final in the Basilica of San Marco, Venice. In October 2009, the choir celebrated its tenth anniversary with the hundredth concert in Karlshamns Stadsteater. In April 2010, the choir set up Bach’s Johannes passion. In addition to the pure concert repertoire, the chamber choir has also participated in several music dramatic projects, such as the set of Menotti’s opera Amahl and The Nightly Visitors and has staged Birger Sjöberg’s Fridas Visor.

In May 2010, the choir won two silver diplomas at the international choir festival Mundus Cantat Sopot, Poland. During the trip to Paris in April 2011, three concerts were given at the International Choir Festival in Claye-Souilly. In October 2011, the choir hosted a visit from the University of St. Thomas Singers, Manila. In August 2012, the choir gave two concerts in St. Petersburg and participated in an international choir contest, which gave the diploma for the best performance of contemporary works by non-Russian composers. During a visit to Karlshamn’s city center Stade, Germany in June 2013, the choir gave a concert.

Two CDs have been produced: a 2011 with Christmas music, and a 2013 with Nordic choir lyrics. In recent years Carlshamns Chamber Choir has been acclaimed for its studies of contemporary Swedish vocal music and meetings with other genres of music. The choir received the 2016 cultural award of the Lions Club in Karlshamn.

Björn Stoltz moved to Karlshamn in 1998 and started Carlshamns Chamber Choir in 1999. He has studied at Kungl. Music School in Stockholm, among others under Eric Ericsson, and also received a solo diploma in the organ. Prior to joining Karlshamn, he appeared as leader of the Skånska Vocal Ensemble and as a teacher at the organ at the Music School of Malmö. In 2009 he was awarded Karlshamns municipality’s Alice Tegnér Scholarship for his significant efforts for Karlshamns music life. After, among other things, having performed 172 concerts together with Carlshamns Chamber Choir, Björn Stoltz passed away in Karlshamn 2016-09-22.

More about the choirs past, performed concerts etc. can be found in Swedish in the old webb.